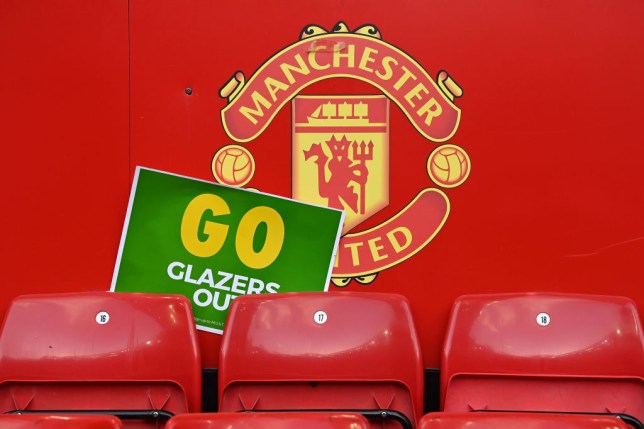 The Glazer family have put Manchester United up for sale (Picture: Getty)

Apple are not planning to make a move to buy Manchester United from the wantaway Glazer family.

The unpopular American owners are looking to make a sale after 17 tumultuous years at the helm following the demise of the ill-fated European Super League project.

Asked why he felt the time was right to stand aside and seek fresh investment, Avram Glazer told Sky News: ‘As we announced yesterday, the board went through a process and it has decided it has going to look at different strategic alternatives and that’s what we’re doing.

British billionaire Sir Jim Ratcliffe is said to be ready to make a bid and match the Glazer’s £5.8billion valuation having conducted a feasibility study earlier this year.

Tech giants Apple, meanwhile, have also been credited with an interest but, according to Macrumours.com, the California tech giants are not preparing an offer, despite beginning to explore pushing into sports content.

Saudi Arabia’s sports minister has described the possibility of owning Manchester United as a ‘good opportunity’.

Buying a football club is an inordinately expensive business decision. Unless you’re a multinational tech company.

Let’s say Apple was interested in purchasing Manchester Utd. The club’s asking price of around £4 billion is a drop in the ocean considering Apple’s war chest is hovering around £203 billion right now.

Amazon, similarly, could pick up the Red Devils without making a dent in the £79 billion cash reserve it was reported to hold at the end of 2021. And while owning a football club maybe won’t help Apple sell any more iPhones or get Amazon Kindles into more hands, it would be a coup de grâce for the biggest battle in tech right now: streaming.

Apple and Amazon (not to mention Netflix, Microsoft and Sony) are all competing for eyeballs on their respective streaming platforms. And sport is the pinnacle.

Amazon has scooped up the rights to Premier League matches, competing with Sky Sports and BT Sport while the Apple TV+ streaming service just announced it will broadcast every live MLS regular-season match, the entire playoffs and the Leagues Cup starting in February 2023.

If Manchester Utd, Liverpool, Chelsea or any other top-flight club were to come under the ownership of a tech giant with a platform to grow, the possibilities would be endless: behind-the-scenes documentaries, exclusive digital merchandise and obviously: real world sponsorship opportunities on shirts and stadium stands.

The Gulf state’s private investment firm (PIF) shook up the world of football just over 12 months ago when they purchased Newcastle United from Mike Ashley and instantly turned the sleeping Premier League giants into the world’s richest football club.

Prince Abdulaziz bin Turki al-Faisal insists the PIF will continue to focus its attention on Eddie Howe’s upwardly mobile club and ruled out the prospect of it purchasing the Red Devils, but admitted the prospect of a private Saudi investor taking over from the Glazer family was a possibility.

Prince Abdulaziz told The Times: ‘The PIF just invested in Newcastle and I think we are focusing as a PIF on that. If there is a private investor that wants to come in, why not?

‘I think it is a good opportunity and if the numbers add up and we can all benefit from that from a business perspective, why not. If there really is an opportunity that benefits us I would encourage the private sector to do so.