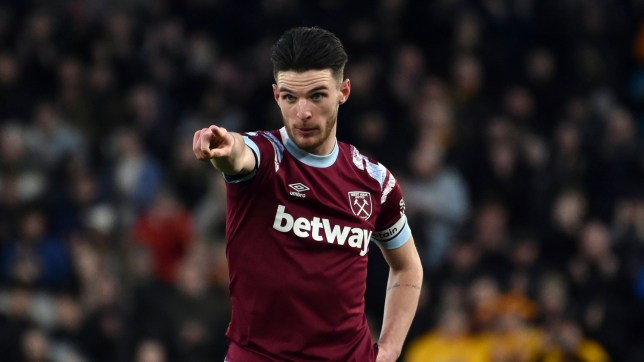 Declan Rice has been earmarked as Arsenal’s No.1 summer transfer target (Picture: Getty)

Mikel Arteta’s track record in developing young players could hold the key to Declan Rice choosing Arsenal over a number of their rivals when it comes to deciding his next club, according to Tony Cascarino.

The Gunners’ unlikely title challenge has been built around a core group of relative novices with the likes of Bukayo Saka, Gabriel Martinelli and William Saliba all taking their careers to the next level under Arteta’s tutelage.

Chelsea have long been considered the favourites to sign a player they discarded during the formative years of his career and came close to bringing him back to Stamford Bridge during Frank Lampard’s tenure.

Liverpool, Manchester United and Manchester City all harbour interest in the England international but Arsenal are now said to regard Rice as their No.1 summer target and are increasingly confident of signing the West Ham skipper.

Reaction to Arsenal’s interest in the 24-year-old has been split, particularly given the Gunners’ need for attacking reinforcements, while the current midfield axis of Thomas Partey and Granit Xhaka has provided the platform on what much of this season’s success has been built.

Former Chelsea striker Cascarino, however, believes Rice would represent an upgrade on Xhaka, who turns 31 later this year.

He told The Times: ‘Mikel Arteta’s Arsenal are a great project to join and not only because they are top of the league.

Rice will cover for the weaknesses of others and provide a platform for team-mates to play their best game.

‘He wins the ball and gets it forward quickly. For a team with such quick and direct attacking talent, having someone who reads moments and intercepts the ball and then immediately supplies a team-mate is critical.

‘I imagine Rice would come in to replace Granit Xhaka, which would give Arsenal depth and increase that solidity and protection in midfield.

‘Alongside Partey, that could be the next Patrick Vieira-Gilberto Silva partnership.’