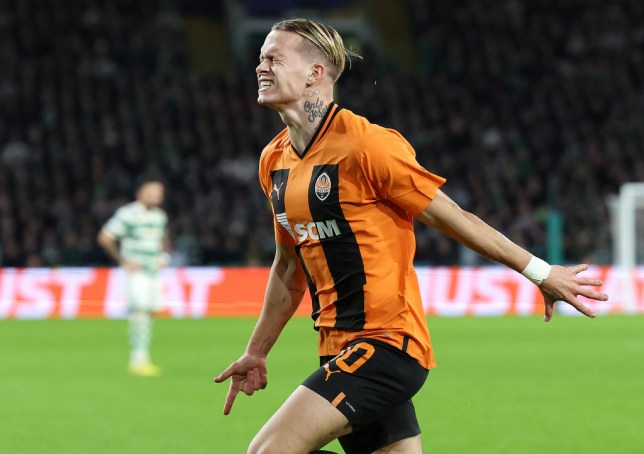 Mudryk is wanted by a host of European sides (Picture: Getty)

Shakhtar Donetsk manager Igor Jovićević has urged Mykhaylo Mudryk to resist a move to Arsenal and continue developing with the Ukrainian giants.

Arsenal have been closely monitoring the fleet-footed winger since the summer with Mikel Arteta keen to strengthen his squad in January after their superb start to the Premier League season.

Mudryk has already welcomed the prospect of a move to the Emirates and while he would want assurances over his role in the side, he has indicated he would be happy to make the move in January.

But his boss at Shakhtar has urged him not to make the move too soon, pointing to the examples of Dani Olmo of Joško Gvardiol, both now at RB Leipzig after developing with Dinamo Zagreb.

Speaking after Shakhtar’s final game before the winter break, a 3-2 win overV Vorskla with Mudryk on the score sheet again, Jovićević was asked if the winger had played his last game for the club.

‘This management will decide what to do when there is an option to sell a football player, the star of the team,’ Jovićević said.

‘As a coach, of course, I would like such a player to play as long as possible in the team, to build a quality Shakhtar around him, so that everyone gains momentum, gains experience and does what, perhaps, the team once did in the Champions League.

The 21-year-old starred in the Champions League this season (Picture: Getty)

‘With our efforts, talent and ambition, I think we could do it together eventually. They are young, I say again, young.

‘There are several football players in Dinamo (Zagreb), for example, Guardiol, who plays for Leipzig and today played in the World Cup [for Croatia], the Spaniard Dani Olmo, who played in Zagreb.

‘Each of them played at least 100 matches for the club and only then moved from the intermediate club, and not immediately to Barcelona and Manchester City.

‘This is one small example of how to build your career correctly, so that you reach the highest level already ready, powerful. To be able to say “I’m here.”.

‘However, the coach is always a bit selfish and wants to have quality players in his team as long as possible to give results and excitement to the fans.’

Mudryk has 10 goals and eight assists in 18 appearances this season and has also been linked with a move to Newcastle United.