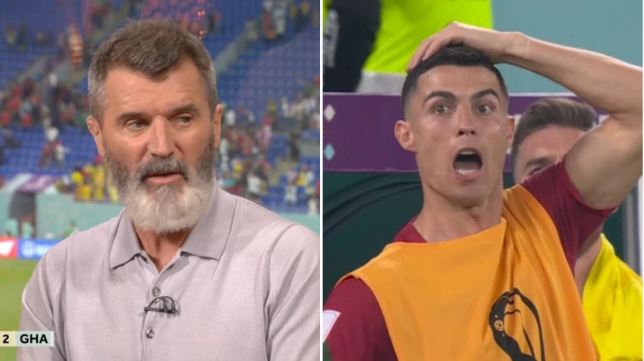 Ronaldo made history in Qatar by becoming the first male player to score at five different World Cup tournaments as he put Portugal in front from the penalty spot.

Ghana equalised shortly after but Joao Felix and Rafael Leao struck to give Portugal breathing space before Osman Bukari’s goal in the 89th minute set up a nervy period of injury time.

Portugal managed to hold on but goalkeeper Diogo Costa almost threw away the three points as he put the ball down inside his area without realising Ghana’s Inaki Williams was behind him. However, Williams slipped at the crucial moment and was unable to get a shot on goal, which spared Costa’s blushes.

Keane, who was working as a pundit for the match for ITV, couldn’t resist a joke at Newcastle’s expense as watched the replay of Ronaldo’s shocked reaction to Costa’s error and said: ‘He [Costa] was very lucky. We saw the best and worst of Portugal tonight.

‘Look at Ronaldo’s face, my goodness. Honestly, he’s just had a call [telling him] Newcastle are in for him.’

Newcastle have been linked with a move for Ronaldo once again following Manchester United’s decision to cancel his contract this week.