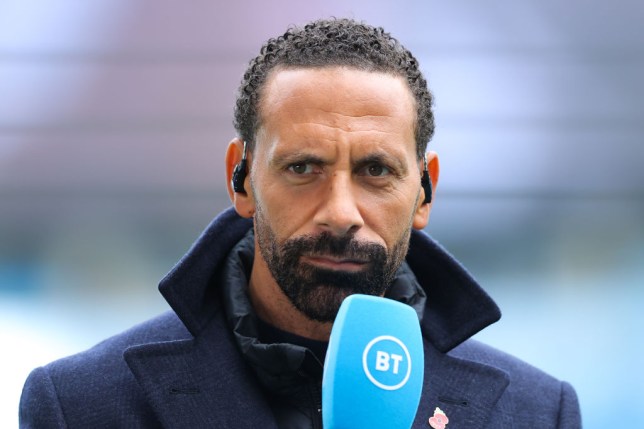 Rio Ferdinand believes six Manchester United players would have a chance of getting in the Manchester City team on current form.

The Red Devils have enjoyed a brilliant run to climb into the Champions League places, but face a huge test on Saturday as Premier League champions and arch-rivals Man City visit Old Trafford.

United have won 20 of their last 27 games under Erik ten Hag and Ferdinand says the distance between the Manchester rivals is ‘definitely getting closer’.

Under Pep Guardiola, Manchester City have won four titles in the last five years and thumped their neighbours 6-3 at the Etihad earlier in the season.

But Saturday’s reverse fixture is expected to be a closer encounter and United will move to within one point of City if they clinch the three points at the Theatre of Dreams.

‘Marcus Rashford would have to be in the team,’ Ferdinand said when asked for his thoughts on a combined XI. ‘Christian Eriksen and Bruno [Fernandes] would be in with a shout.

‘Casemiro is one of the two best holding midfielders in the league, the other being Rodri.

‘Lisandro Martinez and Raphael Varane could put a good case forward as well.

‘The distance between the two sides is definitely closer but it’s still not where we want it to be. City are still way ahead of where Man United are.

‘But the fact you can have an argument over four or five players getting into the team, or to have a conversation about it at least, is a step in the right direction.

‘A derby win would be fantastic and a valuable three and it would lead to confidence levels going through the roof.’

Manchester United have not won any silverware since 2017 but the early signs of Ten Hag’s reign have certainly been promising.

Asked if he believes Ten Hag was bringing the glory days back to Old Trafford, Ferdinand added: ‘It’s too early to say, we have been here with previous managers when it looks like we are on to something.

‘We have got to be patient and give the man time but I do think all the signs are very positive at the moment.

‘He has come in and seen what is happening, he has worked the temperature, assessed how things are, how the land lies, looked at individuals, looked at the shape of the team.

‘There was a bunch of players who were quite low and shot to pieces who he has had to build up as not only as footballers but as men.