Ghana star Mohammed Kudus has rubbished claims that he criticised Neymar, but has sparked further controversy by saying he “respects the elderly”.

WHAT HAPPENED? The 22-year-old, who plays his club football for Ajax, was said to have told The Guardian following a coming together with Brazil forward Neymar during an international friendly in September: “He’s not better than me. He’s just a higher profile player, that’s all. He was defending his country and I was defending mine. I wasn’t about to let him push me around. What makes him better, for now, is that he has achieved a lot. I’ll get there soon.”

WHAT THEY SAID: Kudus has branded that report “fake news”, but now inadvertently risks upsetting 30-year-old Neymar and his 38-year-old international colleague, Thiago Silva. The Ghana midfielder has posted on social media: “My Family & Culture raised me to respect the elderly. @neymarjr like @Thiago6 & many legends inspired us to dream. Just like @neymarjr I humbly want to inspire the next generation like they did. @guardian_sport what’s the agenda? All focus on tomorrow. FAKE NEWS!!!!!!”

THE BIGGER PICTURE: Neymar helped Brazil to a 3-0 victory over Ghana on September 23, with Marquinhos opening the scoring in that contest before Tottenham forward Richarlison bagged a brace. 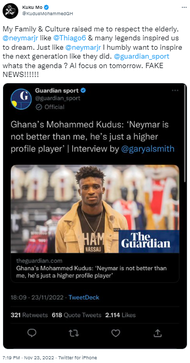 Goal English 'You're f*cking Neymar!' - Ronaldo backs injured Brazil star to bounce back amid 'envy and evil' on social media Neymar can call upon the full support of Brazil icon Ronaldo as he…

Goal English Huge World Cup boost for Brazil! Neymar offers promising injury update Neymar has shared a promising update on his injury rehab, posting a photo which showed a significant reduction in the swelling on his ankle.…

THAT’s why Richarlison is Brazil’s No.9! Winners, losers & ratings as Spurs striker lights up World Cup in Serbia win

Goal EnglishRicharlison: He may not be prolific at club level, but there's something about that famous yellow jersey which brings out the best in Richarlison. There has been plenty of debate as to who should be wearing…