Mesut Ozil got the score and scorers wrong, overestimating Arsenal and underestimating Rapid Vienna a little.

But, eventually, he would have liked what he saw from his teammates, and especially hugely impressive full debutant Thomas Partey, as he watched Arsenal kick-off their Europa League campaign with a hard-fought comeback win from the comfort of his sofa in London, 800 miles away from the Austrian capital.

Left out of both Arsenal’s Europa League and Premier League squads he may be, but Ozil has no plans to drift away and see out his contract quietly it seems. 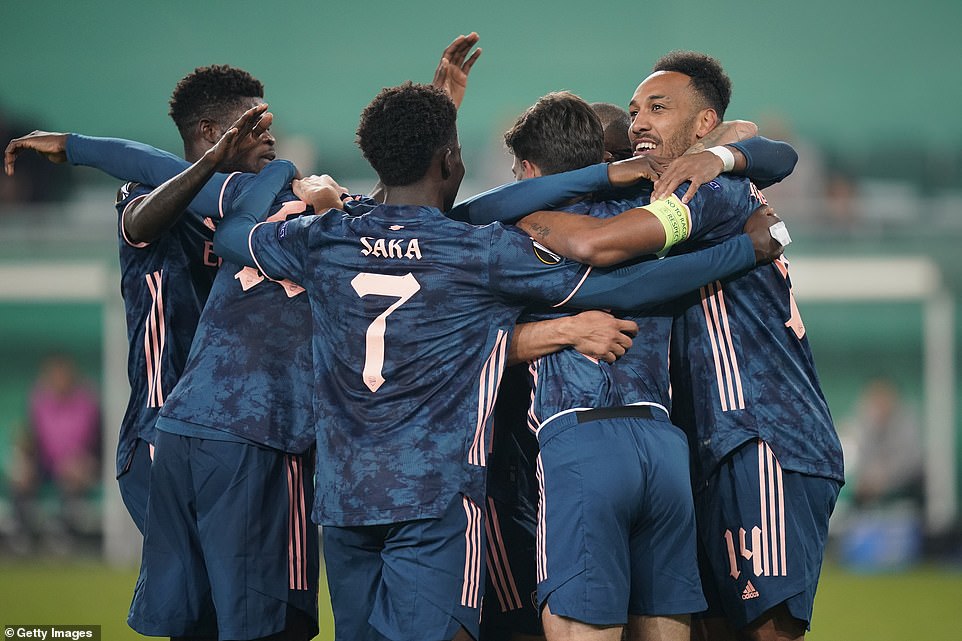 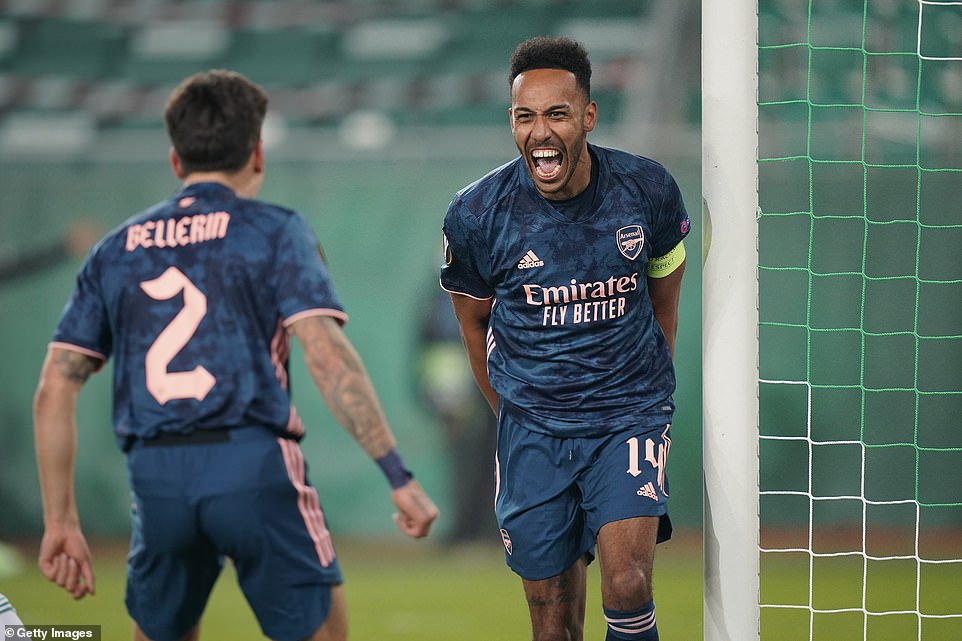 Substitute Pierre-Emerick Aubameyang got the winner for Arsenal in the second half, firing home from short range 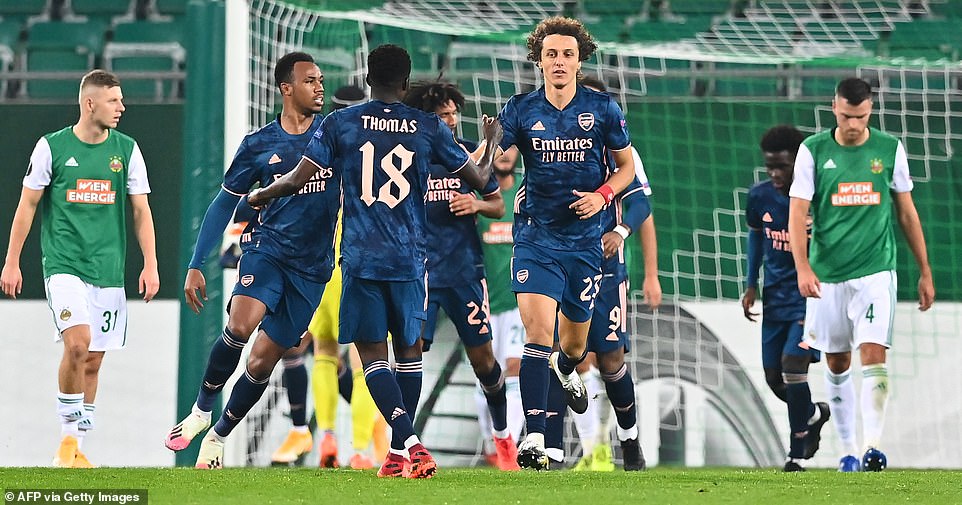 If thursday night is anything to go by he will continue to have his say on, if not in, Arsenal’s season and be getting paid £350,000-per-week to tweet as well as train for the foreseeable future. Good work if you can get it.

‘When I can’t support on the pitch tonight, I will support in front of the TV in London. What are your predictions for the match? I go for a 4-1 away victory. Goalscorers Kolasinac, Elneny, Lacazette and Pepe,’ Ozil tweeted shortly before kick-off, the first of a string of messages in a running commentary which confirmed he remains committed to Arsenal even if he is unwanted.

‘It’s great,’ Arteta said of Ozil’s social media activity. ‘It’s what I want from all the players that are in our squad. I don’t expect anything different so it’s great to hear.’

Arsenal did, though, have to work much harder than Ozil expected in front of the 3000 fans allowed into the Weststadion.

And they had to settle for just two goals, scored in four second-half minutes from David Luiz and captain Pierre-Emerick Aubameyang, and an exciting full bow from Partey which suggested his £45m fee may prove to be a bargain. 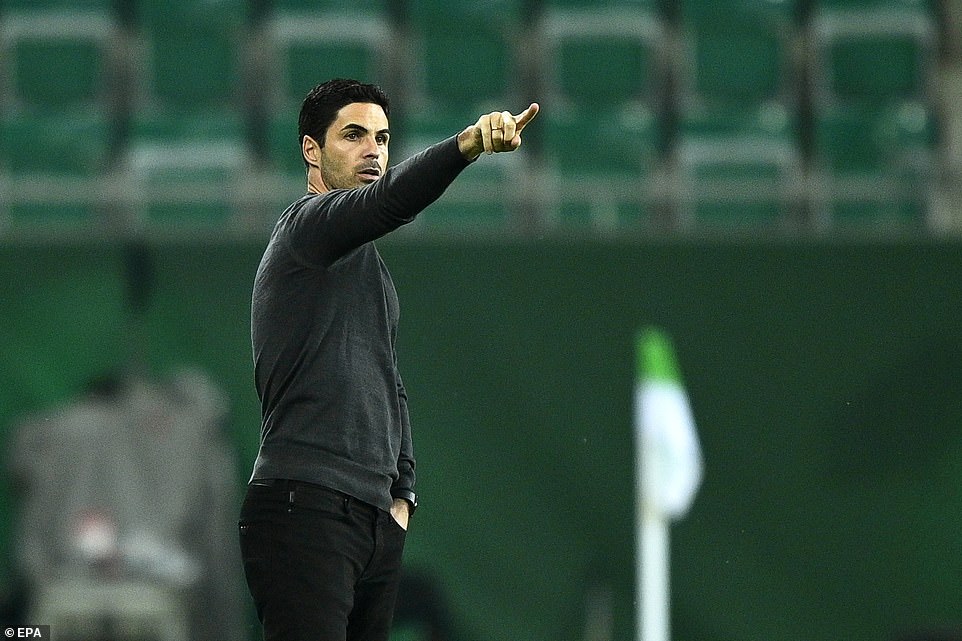 Mikel Arteta’s side managed to get the three points, but he won’t have been happy with some aspects of their performance 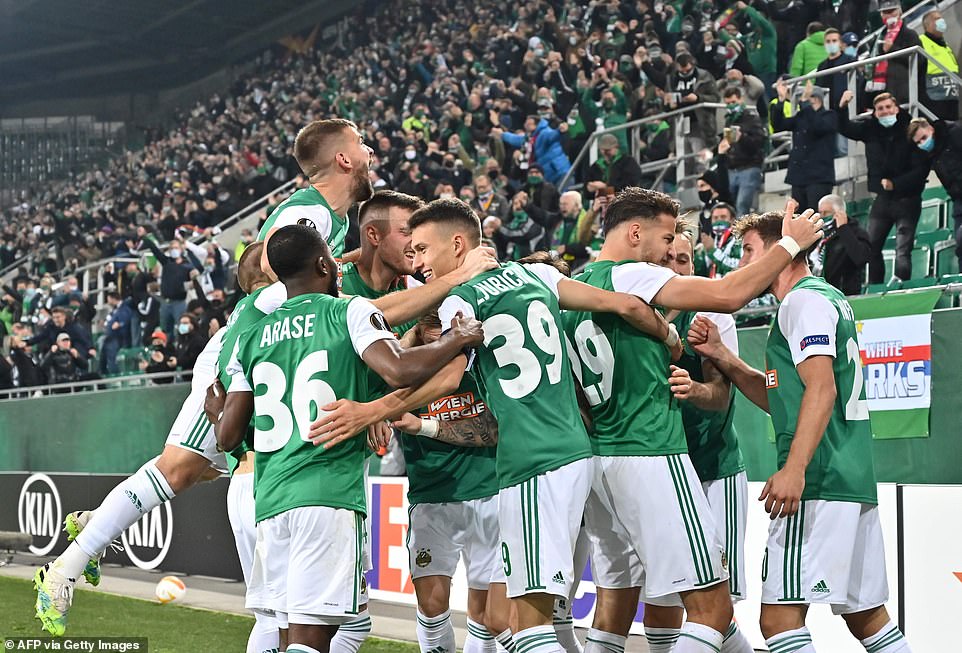 Arsenal went behind in the second half after around 51 minutes, as Taxiarchis Fountas found the back of the net

Their contributions got the shaky Bernd Leno, who seemed to be on a one-man second-half mission to help the hosts, off the hook after his kicking error gifted Rapid Vienna their opener before two more dodgy moments.

His display was the sort that sparked inevitable questions about the wisdom of selling Emiliano Martinez.

‘The goal we conceded is maybe my fault because I demand they do those things,’ Arteta said. ‘But we need to understand when we can do that and when we need to kick the ball to the stand which is a big part of what we are trying to do but to recognise that from the outside is much easier than inside. He has the courage to do that and we have been very successful at doing it with the amount of goals we have scored in important games but we need to find the right balance but I will keep encouraging them to do it in the right moments.

‘But I did like the reaction. We are delighted to start the phase with a victory.’

For 70 minutes Dietmar Kuhbauer’s side were hard to break down, living up to expectations that this would be Arsenal’s most awkward Group B assignment.

Arsenal threatened just once in the first-half when Luiz’s header was turned behind at full-stretch by Richard Strebinger. Sporting a skull cap, Strebinger’s likeness to Petr Cech was impossible to ignore.

And Ozil entertained himself and his 25.1 million followers with a quip about a great week for his former teammate – being named in Chelsea’s Premier League squad and then starting in goal for Rapid Vienna.

Cech would certainly have appreciated Strebinger’s stop and one from Leno soon after to keep out Barnsley loanee Marcel Ritzmaier’s deflected backheel.

The biggest plus for Arsenal from the first-half was the form of Partey which continued after the break as he went on to finish as the game’s standout performer.

He looked at ease in an Arsenal shirt and exactly what they hoped he would be – an assured performer at European level. 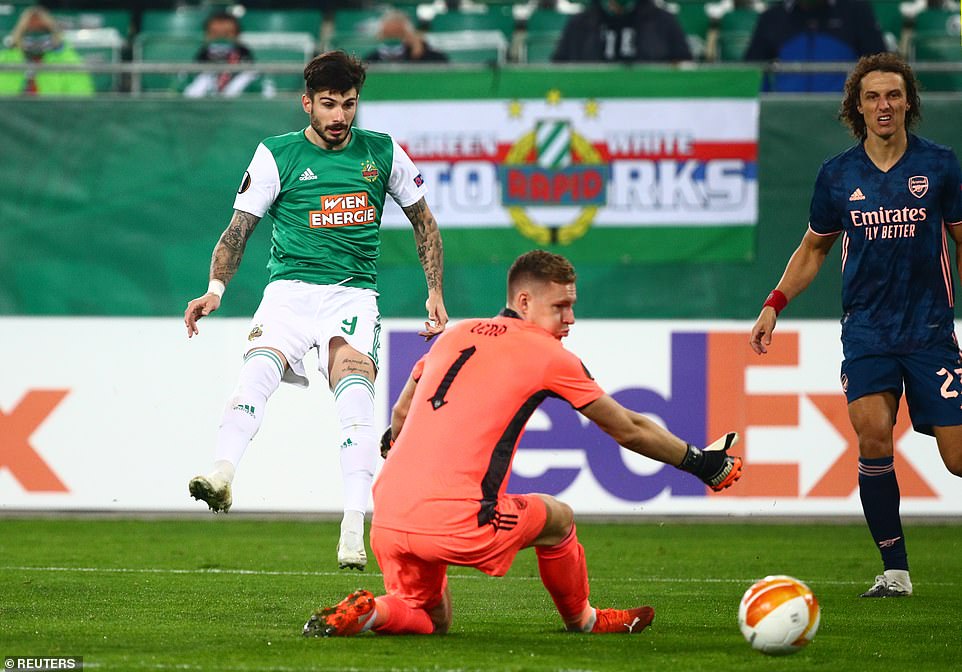 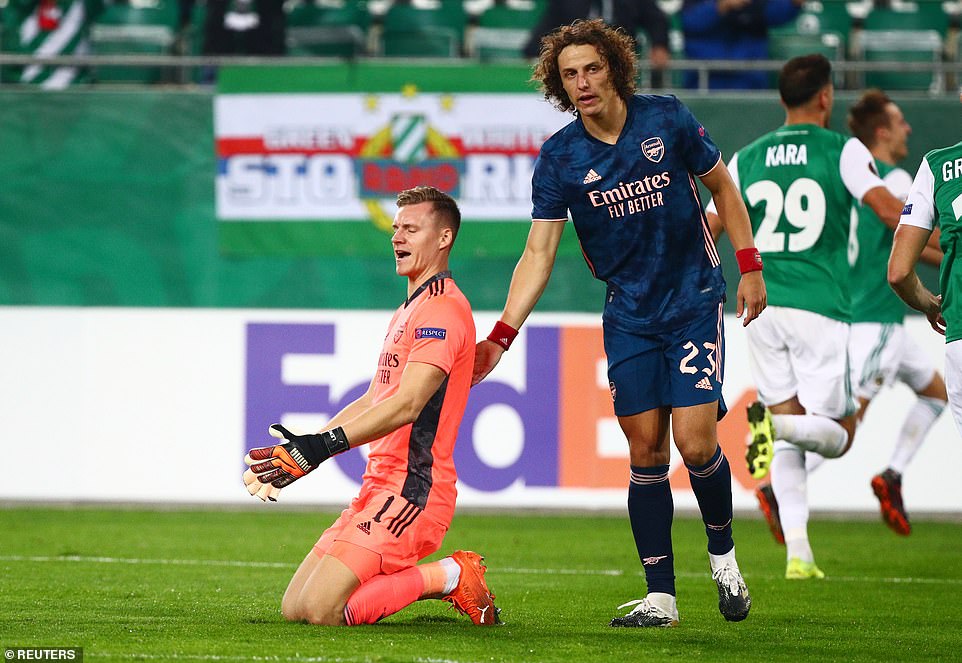 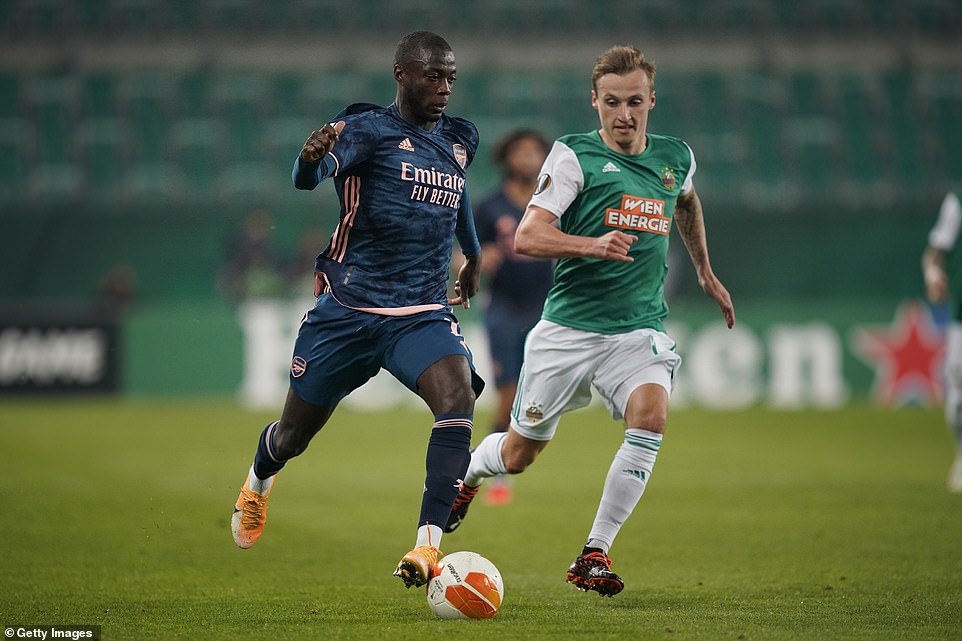 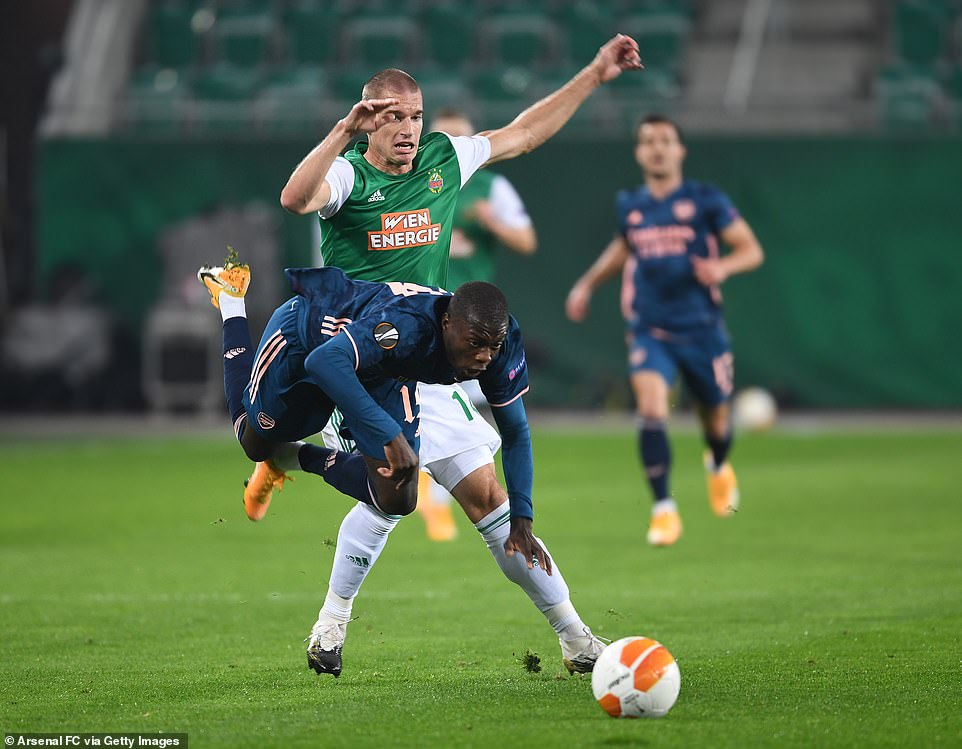 Arsenal were frustrated by Rapid Vienna for a large portion of the match, but got the win thanks to quickfire second-half goals

With some of his probing passing Partey showed there is much more to him than just being a midfield destroyer.

Though he still found time to do his fair share of that too living up to his Octopus nickname by sticking out a long leg to poke the ball away and snuff out a first-half Rapid Vienna counter.

Arteta said: ‘He looked really solid, really comfortable and I think he held midfield by himself in the second half as well when we were leaving more open and we started to take more chances attacking certain spaces with some players but he was fantastic and there is much more to come.’

Given how hard they were finding it to create chances, though, the last thing Arsenal needed to do was gift the hosts openings. 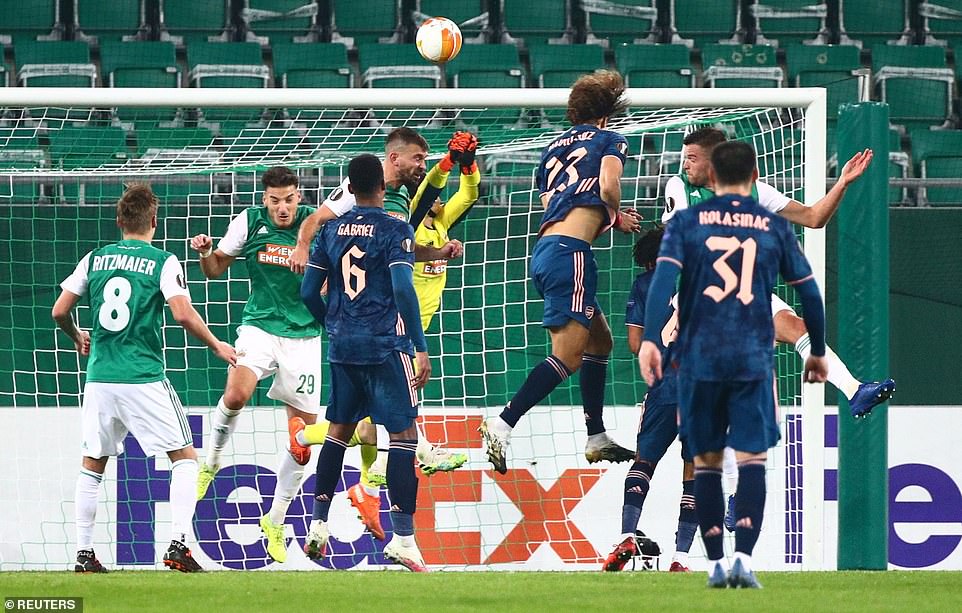 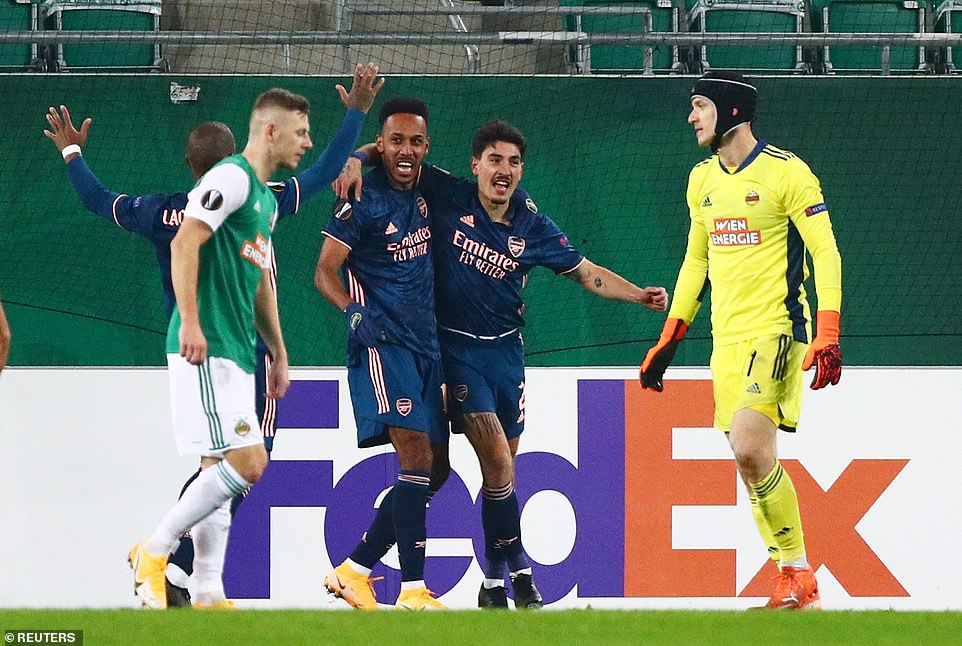 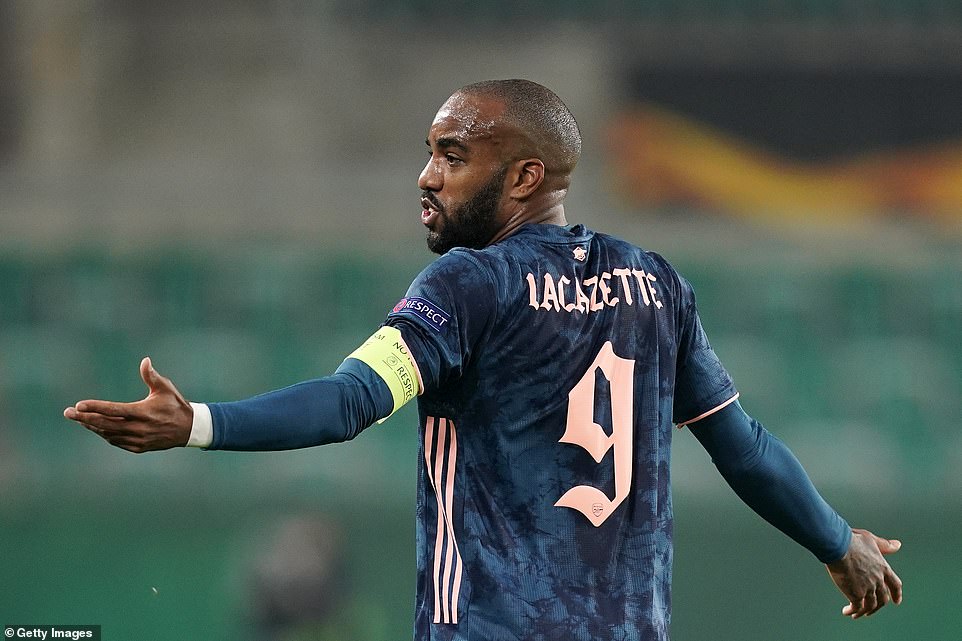