César Azpilicueta and Marcos Alonso are on the front page of today’s Mundo Deportivo, with ‘offensive Chelsea’ written in bold letters.

Within the report, it’s said ‘operation Chelsea underway’ for the duo, whose contracts will expire in 2023.

Chelsea manager Thomas Tuchel is aware of the Spaniards’ desire to move to the Camp Nou. The 32-year-old versatile defender is a ‘priority’ target for Xavi Hernández, and the La Liga side see signing him as ‘more feasible’ when compared to Alonso.

There are ‘more doubts’ whether the Blaugrana can meet the economic conditions set by the west London club to sign the left-back, who is Barca’s ‘number one target’ for that position. They are asking €20m, which is not ‘feasible’ for the Spanish giants.

In both cases, ‘there will be an important novelty’ as there will be a possibility to ‘formally negotiate with Chelsea’ this Friday. 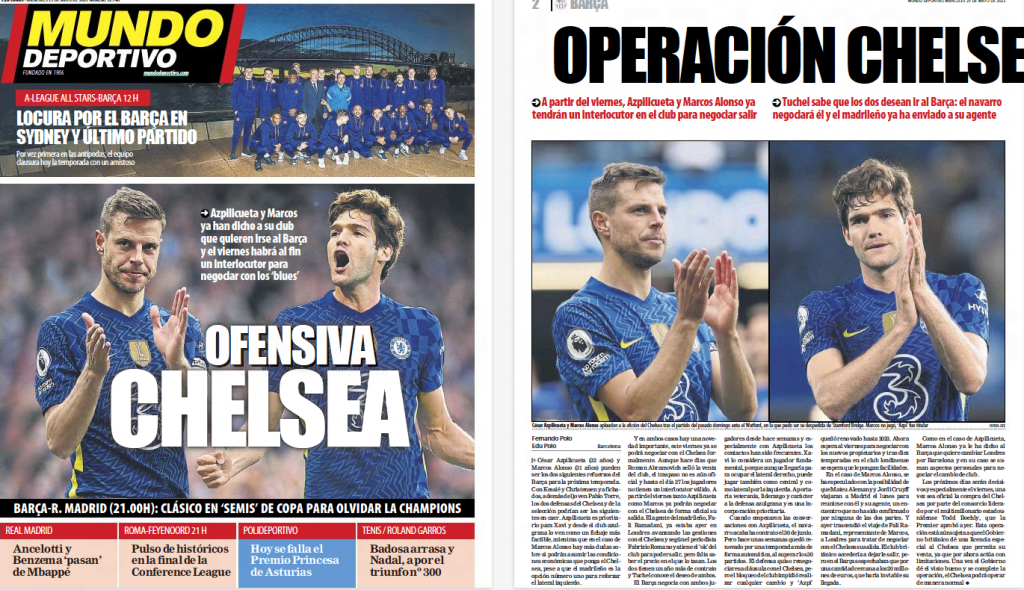 The Premier League Board approved the sale of the English club to Todd Boehly/Clearlake Consortium on Tuesday, but the deal is not yet final since the Blues will have to work with the UK government to secure the necessary license to seal the takeover.

Once the takeover is official, the two defenders will be able to ‘officially negotiate their departure’ from Chelsea.

There has been speculation of Barcelona chiefs Mateu Alemany and Jordi Cruyff meeting Alonso’s agent Fali Ramadani in Madrid on Monday. This has not been confirmed by either party so far.

Both players have the desire to make a switch to Barcelona this summer. In Alonso’s case, ‘personal aspects’ are added, but there’s no mention to what th…