Lionel Messi has been mocked over his standing as the supposed GOAT of football following Argentina’s shock defeat to Saudi Arabia.

The Albiceleste, who are fancied by many to go all the way in Qatar, were humbled by Middle Eastern opposition in their opening game of the 2022 finals as they slipped to a 2-1 reversal.

Messi had fired Lionel Scaloni’s side in front from the penalty spot but, after seeing a further three efforts ruled out for offside, Argentina collapsed in the second-half to suffer a stunning setback.

Unsurprisingly, followers from afar were quick to flood social media afterwards with messages questioning whether a seven-time Ballon d’Or winner will ever get his hands on an elusive trophy and cement his place at the top of an all-time list regarding the greatest players to have ever laced up a pair of boots. 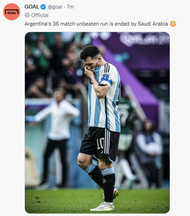 Argentina’s defeat was their first in a World Cup opener since 1990 – when they did go on to make the final – and uncomfortable questions are already being asked of the South Americans and their talismanic captain.

Messi looked bright during the opening exchanges against Saudi Arabia, with there little doubt that he would find the target when stepping up to the spot.

His influence waned, though, and Argentina found themselves lacking an attac…

Inter Miami CLOSE to signing Messi as Barcelona miss out

What result do Argentina need to qualify for last 16 of 2022 World Cup?

Goal English What result do Argentina need to qualify for last 16 of 2022 World Cup? Lionel Messi and his teammates have things in their own hands again following their win over Mexico, but what result do they need to…