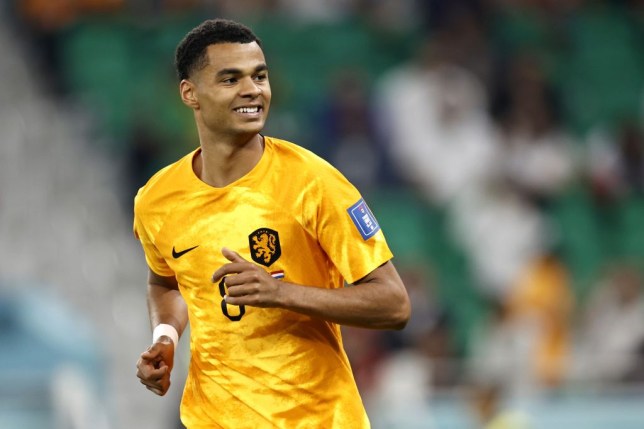 Teddy Sheringham believes that Manchester United do not need to sign highly-rated winger Cody Gakpo, even after his World Cup heroics.

Gakpo has long been linked with a move to Old Trafford, with the 23-year-old admitting that he came close to moving to the Premier League over the summer before deciding to stay at PSV.

He is regarded as one of the best young talents in the game right now, having recorded a staggering 13 goals and 17 assists in just 24 games for his club so far this season.

And if Gakpo’s name wasn’t already well-known, a goal in the Netherlands’ 2-0 win over Senegal at Qatar 2022 has seen his profile raised even higher.

Valued at £40million, many expect a big club to snap him up when the transfer window reopens in January, Sheringham doesn’t want United to be making a bid.

‘Man United do not need another flitty player like Gakpo in their ranks,’ the former striker told BoyleSports.

‘We need a centre-forward who can lead the line now that [Cristiano] Ronaldo has gone. We need a focal point for the team to hit and who can bring players into play.

‘We cannot go for another technical player who can play as a winger or a false nine. We already have so many of those in [Anthony] Martial, [Marcus] Rashford and [Jadon] Sancho and right now it’s a bit of a detriment to be honest.’

With Ronaldo’s departure from United now confirmed, signing a striker is perhaps Erik ten Hag’s main priority, though aside from Gakpo, the Red Devils have not been heavily linked with any other forwards.

Gakpo should next be in action at the World Cup on Friday, when Holland play Ecuador.