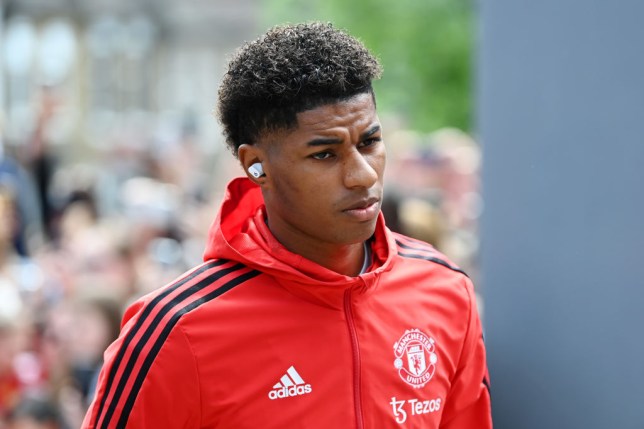 The forward only started 13 Premier League matches this past season (Picture: Getty)

Marcus Rashford is desperate to return to his best form for Manchester United and has hatched a plan to impress new boss Erik ten Hag from day one, according to reports.

The 24-year-old has endured a miserable season which started on the sidelines, with the forward having delayed an operation on his shoulder so he could play at Euro 2020 – but then barely featured.

After returning from injury, Rashford only made 13 Premier League starts – and 32 appearances in total across all competitions – netting just four times.

Rashford is used to being ever-present in the United starting XI (Picture: Getty)

Bronchitis prevented Rashford from playing in defeats to Brighton and Crystal Palace at the end of the season, but even before that he had struggled for regular game time under Ralf Rangnick and lost his place in the England squad.

The interim boss had often favoured Jadon Sancho on the left wing while Rashford failed to strike up a rapport with Cristiano Ronaldo on the pitch, going on a barren run in the Premier League that dates back to January.

There had been speculation Rashford might need to leave the club to get his career back on track, but The Telegraph reports that the forward wants to stay and fight for his place under Ten Hag.

After missing pre-season last summer, Rashford is determined to make up for lost time and has scheduled an ‘intense’ warm-weather training camp before this summer’s pre-season starts.

The academy graduate wants to hit the ground running and impress Ten Hag and will be put through his paces next month in the US before returning to Manchester for the start of pre-season with United on June 27.

Bayern Munich are believed to be monitoring Rashford’s situation while, speaking in March, Rangnick suggested United would not stand in the forward’s way if he decided to leave Old Trafford – though insisted he was happy at the club.

‘I don’t think that he’s not had enough game time,’ said the 63-year-old. ‘He’s had 13-14 games since I’ve been here now, he played more games from the start than he didn’t play from the start.

Rashford wants to be in top shape for the start of pre-season (Picture: Getty)

‘I don’t think this is an issue and he never said anything about that since we spoke yesterday. But the [transfer] window is closed now. Even suppose he and his agents or his family at one stage of the summer think about maybe going to another club, well then he can do that but in the summer.

‘I spoke with him yesterday and the day before so I don’t know anything about him being unhappy. He didn’t say anything to me, he said to me that he is still happy and that he wants to perform on a high level for the club. There was no mention of him not being happy here.’