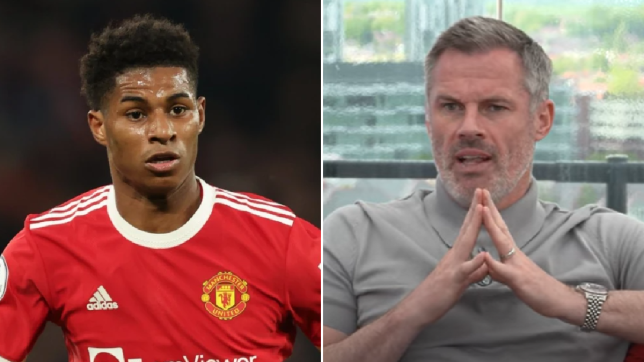 Rashford was one of several United players to struggle this season, scoring just five goals in 37 appearances in all competitions.

The 24-year-old surpassed 300 appearances for his boyhood club last month but his future at Old Trafford is more uncertain than ever.

Rashford was considering a move away from United earlier in the year after being repeatedly overlooked by interim manager Ralf Rangnick, but is said to want to revive his United career under Ten Hag.

However, that decision could be taken out of his hands and Anfield hero Carragher is of the opinion that Rashford is ‘not good enough’ for Manchester United and is instead at the level of ‘Arsenal or Tottenham’.

‘That’s all it is. That’s it, he’s not quite good enough for Manchester United. He’s Tottenham or Arsenal.’

United legend Gary Neville was also on the show and disagreed with his Sky Sports colleague, saying: ‘He’s proven he’s good enough. I can’t let you get away with that.’

But Carragher responded: ‘He’s not going to win you the league or the Champions League. You’d need the two up front with him to be megastars and he’d be the addition.’

Carragher ended the debate with: ‘OK he’d be a squad player. He’s not good enough to be in the first XI to win Manchester United the big trophies, he’s just a level below that.’

Earlier in the show, Neville had backed Rashford to improve under former Ajax boss Ten Hag and explained why he thinks the England international has been struggling.

‘I think with Rashford for me it’s a combination of the disease that’s been in United’s dressing room this season, confidence of every single player, the scrutiny including ourselves on television.

‘There’s no doubt that the mass campaigns that he’s had off the pitch which to be fair have achieved more than he’s achieved on the football pitch must take it’s toll, with people contacting you all the time from a non-football perspective.