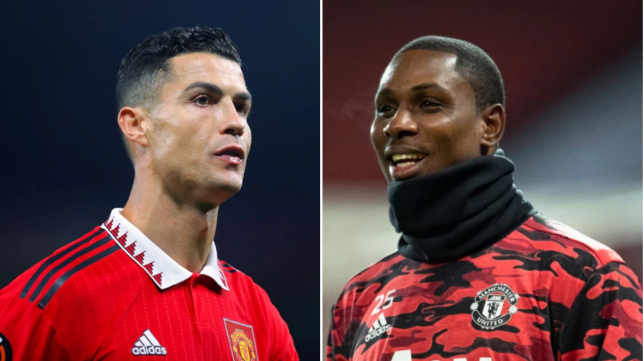 The Red Devils are exploring a number of options (Pictures: Getty Images)

Manchester United are keen to replace Cristiano Ronaldo in some capacity when the January window opens and are entertaining an Odion Ighalo-style short-term loan, according to reports.

The Red Devils had wanted to sign a new forward during the summer window and were interested in Darwin Nunez, though Liverpool swooped in to secure a club-record £85million deal.

Other possibilities were explored, such as PSV winger-turned-frontman Cody Gakpo, though United’s hierarchy ultimately decided to stick with the options already at their disposal.

But the recent drama that has surrounded Ronaldo – which saw United terminate his contract this week – means Erik ten Hag is now very light on attacking options.

The Portuguese superstar, who was United’s topscorer last season, was one of just three senior forwards capable of leading the line along with Anthony Martial and Marcus Rashford.

But the latter’s best performances have generally come when floating off the left wing, while the former – who spent the second half of last season out on loan at Sevilla – has had another injury-hampered campaign.

According to the Daily Mail, United are therefore keen to bring in a new striker in January and are discussing whether to make a statement signing or bring in a stop-gap.

United’s transfer committee originally felt they could hold off until the summer of 2023 – when Ronaldo’s contract had been due to expire – to bring in a new marquee forward.

But if the right player is available they are prepared to bring those plans forward by six months, though they are conscious of how difficult it can be to make a big signing during the January transfer window and United’s board are generally wary of doing business in the winter.

PSV, for example, would rather not lose Gakpo in the middle of the season and a good World Cup campaign for the Dutchman would see them considerably up their asking price.

But United feel the Ronaldo situation has necessitated reinforcements up top and would be prepared to sign a striker on a short-term loan until the end of the season if none of their primary targets are available or affordable.

The Red Devils employed a similar strategy three years ago when they signed Ighalo on loan from Chinese club Shanghai Shenhua in January 2020.

Although he failed to net in 12 Premier League appearances, the Nigerian striker impressed enough in his rotation role to have his loan deal extended by another six months before leaving in January 2021.

If there is a forward of similar experience and pedigree available when the transfer window opens, United will consider a short-term stopgap now befo…