When it comes down to winning the title race on the final day of the season, no club does it quite like Manchester City.

Down 2-0 to Aston Villa with 15 minutes remaining, the heart rates of the gathered City faithful at the Etihad Stadium were sky-high.

But whatever nervousness was bubbling among fans clad in sky blue never seeped into the City players on the field.

Because in the space of just five minutes, City flipped the game — and indeed the title race — on its head.

A cushioned header from Ilkay Gundogan in the 76th minute breathed life into City’s title defence, as players rushed to retrieve the ball from the net and restart the game to continue the momentum.

Just two minutes later, Rodri popped up with a long-range strike to level the scores as Villa appeared totally shell-shocked.

All of a sudden, the decibel levels around the Etihad were rising like never before as the fans willed their team on.

If there was a roof on the stadium, it would have been blown into orbit when Gundogan scored his second of the game in the 81st minute to complete City’s comeback and ensure the title would once again remain with Pep Guardiola’s side. 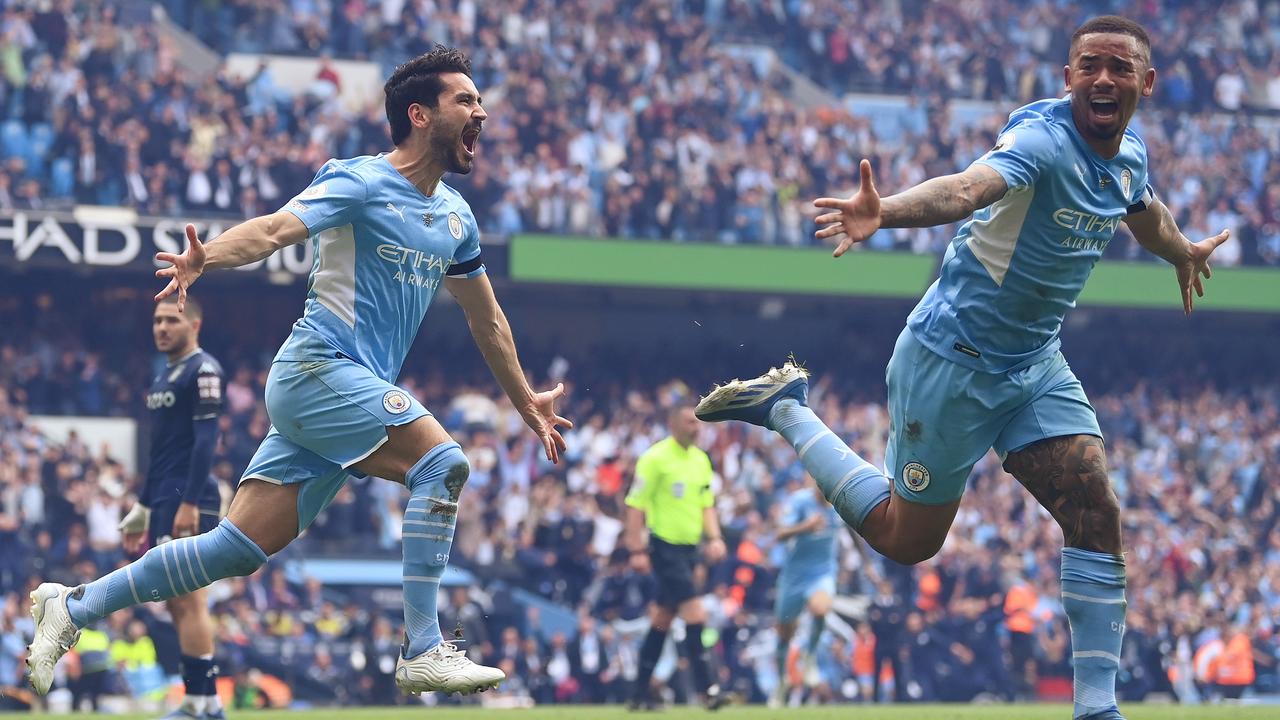 Guardiola was overcome with emotion on the final whistle, as tears of joy rolled down his cheeks.

The Spaniard was effusive in his praise for his team’s accomplishment, as they once again remained at the peak of the Premier League.

“When you win in this country four times in five years, it is because these guys are so special.

“They will be remembered forever.”

Not only did this squad write itself into City folklore, but they did it 10 years on from one of the most iconic moments in not just club, but football history.

Guardiola was overcome with emotion. (Photo by Stu Forster/Getty Images)

A decade ago, City secured its first-ever Premier League title in the most dramatic of fashions.

Down 2-1 to Queens Park Rangers and needing a victory to finish ahead of rivals Manchester United to win the league, well, we all know the rest.

Edin Dzeko popped up in the 92nd minute and then came one of the most iconic moments in Premier League History.

You can hear Martin Tyler’s famous call of the moment in your head: “Balotelli … Aguerooooo!”

City’s comeback against Villa wasn’t quite as dramatic as the one against Queens Park Rangers, but then again, scoring three late goals in five minutes is pretty special.

The fans at the Etihad erupted into pandemonium upon the final whistle in utterly chaotic scenes.

City fans climbed onto the goal and the crossbar. (Photo by Stu Forster/Getty Images)