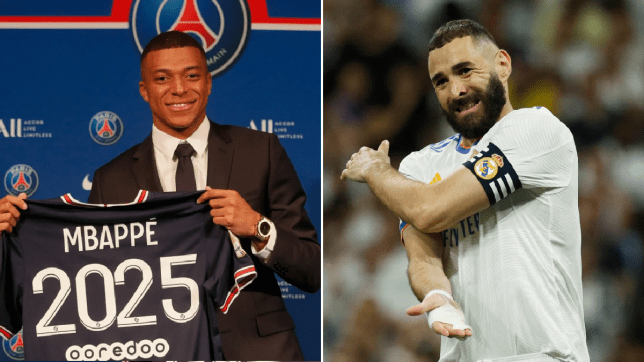 Kylian Mbappe has played down Karim Benzema’s dig following his decision to reject a move to Real Madrid and stay at Paris Saint-Germain.

The France international appeared to be set on joining Madrid this summer after agreeing a contract with the Spanish champions.

But the 23-year-old performed a late U-turn and agreed a new deal with PSG which keeps him tied to the French club until 2025.

Following Mbappe’s decision, Benzema posted an image of his hand pointing at the Madrid badge on his Instagram and another image of Tupac shaking hands with actor Stephen Baldwin.

The image has connotations of betrayal as some believe the man in the background of the image allegedly betrayed Tupac.

‘Yes, yes, and I saw several Real Madrid players publishing things. I have nothing to say,’ Mbappe told Marca.

‘Of course, when I go to the French national team, I will explain to Karim why I stayed at PSG because we have a good relationship.’

When asked about Benzema’s post during his press conference, Mbappe replied: ‘You don’t have to have done Saint-Cyr [French military training] to understand that it comes from above, right?

‘I didn’t want to overdo it. I know everyone was talking about Karim and Kylian, Kylian and Karim… but when we were with the national team, we were only talking about the evening meal. We weren&#82…