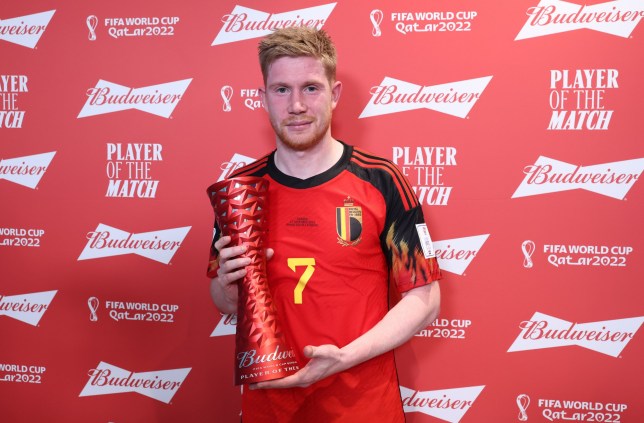 Kevin De Bruyne admits he does not deserve his Man of the Match award after Belgium scraped past Canada in their World Cup opener on Wednesday evening.

Belgium struggled for the majority of the game and were rescued by Thibaut Courtois in the first half as he saved a penalty to deny Alfonso Davies.

Michy Batshuayi found the net before the break to put Belgium in front, while Canada were let down by their lack of cutting edge in the final third and were unable to score an equaliser.

Belgium top Group F heading into their match against Morocco on Sunday, but De Bruyne insists his side need to make significant improvements ahead of their second group game.

‘I don’t know why I have got the trophy. Maybe it’s because of the name.

De Bruyne added: ‘This was not good enough.

‘We made it difficult for ourselves and stress crept into the team. There was more space than was seen and we used the long ball too often.

‘It has to be better, myself included.’

‘Today was such a difficult game, Canada were better than us in what we wanted to do,’ Martinez said.

‘They came to the tournament with an incredible celebration, great emotion, what we expected. This Canada team has a lot of pace and directness.

‘To be fair, we had to show another side of our play.

‘I’m delighted because we won the game through grit and experience, through the quality of our goalkeeper who kept us in the game by saving the penalty, many elements. The victory today is more important than when you play well.

‘Canada deserved to be better than us in the way they played. I think the result reflects the things that we had to do and the way we defended for each other and took our chance.

‘It’s a win and we need to play better and to grow. We’ve been here five days, we have to gr…