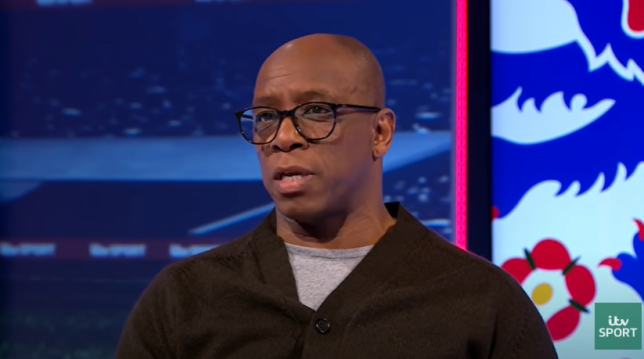 Ian Wright says Kepa is ‘not working out’ at Chelsea (Picture: ITV)

Kepa is currently back in the Chelsea team after former Stamford Bridge No. 1 Edouard Mendy lost form and then required surgery on an injured finger.

But the Spain international continues to attract criticism and appeared to be at fault for both Manchester City and Fulham’s winning goals against Chelsea over the past week.

Kepa became the most expensive goalkeeper in history when he completed a £72m move from Athletic Bilbao in 2018 but the 28-year-old has largely underwhelmed for the west London side.

Wright believes Kepa was to blame for Fulham’s winner at Craven Cottage as the shot-stopper initially went to claim Andreas Pereira’s cross but hesitated and was then caught in no man’s land as Carlos Vinicius headed the ball into an empty goal.

It was not the first time Wright has been disappointed by Kepa’s decision-making and the former Arsenal and England striker insists it is ‘not working out’ for him at Stamford Bridge.

‘The goalkeeper [Kepa] has got to either stay on his line for the cross or he’s got to go through everyone and get to the ball,’ Wright said on his Ringer FC podcast.

The £72m signing has struggled at Stamford Bridge (Picture: Reuters)

‘The way the ball came in, it’s a good cross, it’s a tempting cross. But if the goalkeeper is in the right position, it shouldn’t give you a problem. You either stay on your line or you go and palm it away, it was in the air long enough.

‘I’m looking at Kepa and I’m sorry man but it’s not working out. The man makes too many mistakes. He looks very nervy.

‘When you look at Fulham’s goals and the Man City goal, I think Kepa has to do better.

‘We’re looking at a Chelsea side where even if they’re playing well, I cannot look at the goalkeeper and think he’s going to help them win a game. I can’t see it.’

Wright also pointed the finger at Chelsea summer signing Koulibaly, who he says has looked ‘f*****g nervy’ and ‘very anxious’ in his first season in the Premier League.

The Senegal international established himself as one of the best defenders in Europe during his successful spell with Napoli but has been one of several Chelsea players to struggle this season.

Wright added: ‘How can someone like Koulibaly be so fragile? He looks f*****g nervy and very anxious right now.’

Chelsea’s defeat to Fulham leaves them 10th in the Premier League ahead of this weekend’s round of fixtures.

Blues boss Graham Potter admitted he was ‘very disappointed’ with the team’s latest loss but refused to blame Kepa.

‘I never like to speak about individuals when we lose,’ said Potter, who replaced Champions L…