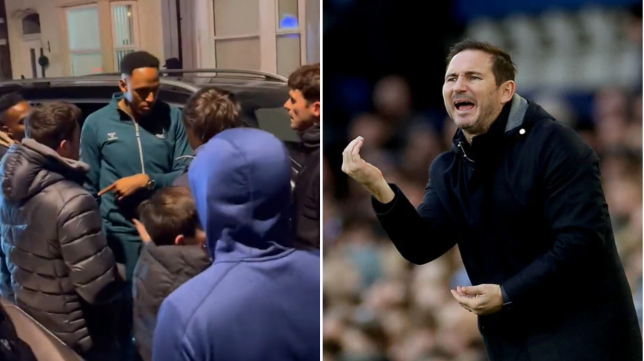 The Toffees are now winless in their last nine matches (Pictures: Twitter / Getty)

Everton supporters confronted players as they left Goodison Park following Saturday’s defeat to Southampton, while Frank Lampard is now on the brink of being sacked.

The Toffees took the lead against bottom-of-the-table Saints but a second-half brace from James Ward-Prowse secured a 2-1 victory for the visitors that heaped even more misery on the home fans.

Prior to the match, Everton fans had planned a protest against the club’s ownership which resulted in the board of directors being advised not to attend due to a ‘real and credible threat to their safety and security’.

In the build-up, there had been malicious and threatening correspondence received by the club and there were fears of anti-social behaviour – including ‘targeted physical aggression’.

A host of banners protesting against the board and owners were held up before, during and after the match, with a chorus of boos ringing out around the stadium when the full-time whistle was blown as Everton slipped to 19th place – ahead of Southampton only on goal difference.

There were even uglier scenes outside Goodison Park around an hour after full-time as the players made their way home following the match.

Angry supporters blocked the road by the stadium exit and confronted players as they left the ground, with Colombia international defender Yerry Mina actually stopping and getting out of his car to speak to the fans.

The centre-back, whose young child looked upset in the car as fans blocked the road, tried to deescalate the situation, with one supporter saying: ‘Thank you very much, you’re more man than any one of them lads in that team’.

Mina – who was an unused substitute against Southampton – shook hands with supporters and made them a promise, saying: ‘When I play, I will give my life for this club’ which prompted cheers and claps from the crowd.

Lampard, meanwhile, is now the odds-on favourite with the bookies to be the next Premier League manager sacked, with his side not having won a match since October.

Speaking about Everton’s miserable run of form, and whether he can continue in charge, Lampard replied: ‘I know I’m not a miracle worker, I know I am not the best manager in the world but I’ll try my best.’

He added to Sky Sports: ‘It is an unfortunate day. We have to take responsibility, myself first. We have to do better.

‘When you take this job you understand the nature of it. I want to get things right here. I will try and do the best job I can possibly do. We had amazing times last year staying up when people thought we would be relegated.’