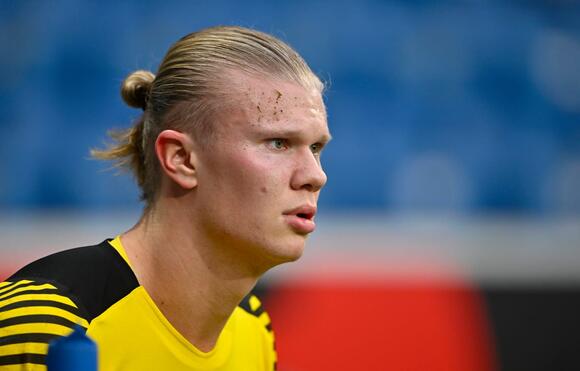 Manchester City’s incoming signing Erling Haaland completed a further medical check-up in Barcelona on Tuesday and is subsequently expected to arrive in England, according to a new report.

The Premier League champions have confirmed the signing of Erling Haaland from Borussia Dortmund for a reported transfer fee of £51 million subject to an agreement over personal terms with the forward’s representatives this month after their long-drawn pursuit of the Norwegian.

The 21-year-old will become a Manchester City player on July 1 and bid farewell to Borussia Dortmund supporters in a 2-1 victory over Hertha Berlin in their final home game of the Bundesliga campaign.

Despite heavy interest from Real Madrid, who were once believed to be the young striker’s preferred destination, Haaland will join Pep Guardiola’s side for pre-season ahead of the 2022/23 campaign after City retained the Premier League title with a dramatic win over Aston Villa on Sunday.

With Gabriel Jesus being heavily linked with an exit and ongoing uncertainty surrounding the respective futures of Riyad Mahrez and Raheem Sterling at the club, Haaland’s arrival is set to boost Pep Guardiola’s frontline and provide the Catalan the option of operating with a natural number nine.

It is believed Haaland’s decision on his next destination was not driven by money but instead the project and the potential for the young marksman to progress his development and challenge for major trophies.

Moreover, it emerged this week that Read more – CITYXTRA