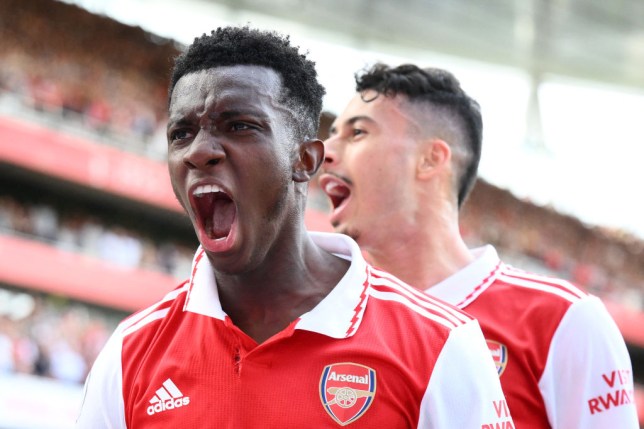 The striker has now decided to remain at the Emirates (Picture: Getty Images)

Eddie Nketiah has been convinced that his future remains at Arsenal and will sign a new five-year contract extension in the coming days, according to reports.

The 22-year-old – who enjoyed a more prominent role in the team in the final weeks of the season – had been expected to leave the Emirates on a free transfer this summer, with his current deal expiring at the end of next month.

Nketiah did not feature in a Premier League matchday squad until November last year, and did not make his first league start until April.

However, he was almost decisive in Arsenal’s pursuit of a top-four finish, netting braces against Chelsea and Leeds and also scoring on the final day of the season against Everton.

Despite his late flurry of appearances in the side – starting each of the last eight matches of the campaign – Nketiah was still believed to have reservations about committing his future to Arsenal and was conscious of the fact the club are looking to sign a new first-choice striker.

But, according to The Athletic, he has now been convinced to stay at the Emirates and is on the verge of signing a new long-term contract.

The exact details of the deal are still being finalised, but Nketiah has decided to snub interest from the likes of Crystal Palace and will put pen to paper on a new deal that is expected to last until 2027.

Nketiah’s decision is a huge boost for Mikel Arteta and means the Gunners only need to look at bringing in one new forward this summer – with Manchester City’s Gabriel Jesus top of their wish list.

The potential exits of both Nketiah and fellow contract rebel Alexandre Lacazette – coupled with Pierre-Emerick Aubameyang’s January departure – would have left Arsenal totally deprived of options up front.

Lacazette, who turns 31 in a few days’ time, is still expected to leave the club next month on a free transfer.

Much like Nketiah, Mohamed Elneny enjoyed a resurgence in recent weeks, deputising for the injured Thomas Partey, and also earned a new deal at the club.

Arsenal will look to push ahead with a number of new signings this summer, with Jesus their top target to bring more firepower up top, while Arteta also wants a new midfielder and right-back.