Cristiano Ronaldo to Arsenal? Don’t be so ridiculous!

Piers Morgan has been leading the calls for the Gunners to sign the Portuguese superstar, but it would only serve to derail their superb season

Cristiano Ronaldo to Arsenal? Oh please, don’t be so ridiculous.

I’m not often surprised by football nowadays, but the suggestion that Mikel Arteta should look to bring in Ronaldo following his exit from Manchester United has certainly got me stumped.

No, it’s more that there seems to be plenty of other Arsenal fans – on social media anyway – that seem to agree with him.

I just honestly don’t get it.

Ronaldo has been a truly wonderful player, he’s one of the all-time greats. But now he’s the exact opposite of what Arsenal need.

He has an ego bigger than Old Trafford and that’s not really a criticism. When you’ve had a career like Ronaldo has and have hit the incredible heights that he has, then you have every right to rate yourself as highly as he clearly does.

But the last thing this Arsenal changing room needs right now is someone like him walking through the doors.

Arsenal and Arteta have spent the past two years getting big egos out of the club in a bid to unite the changing room. And a look at the Premier League table right now shows how much that has worked. 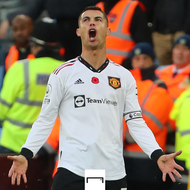 It’s not about Arteta being unable to manage big players, as Pierre-Emerick Aubameyang suggested after he was ushered out of north London last year.

“We don’t allow big egos,” Mohamed Elneny said last month, while discussing the bond that has been built within the squad under Arteta. “This is the dressing room we have now. Everyone loves each other and everyone works for each other. This is what actually makes our squad really strong, because we don’t have egos in the team.”

Those comments are a real insight into what has been driving Arsenal’s success this season. The rebuild process over the past two years has followed a carefully mapped-out plan, and there is still a long way to go before that plan comes to fruition.

But the progress has been clear and the idea that some want a character like Ronaldo to come in and rock the boat right now – just as things are going so smoothly – is crazy. 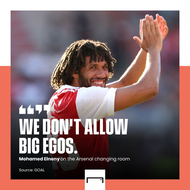 “Gabriel Jesus needs a scoring partner next to him,” Piers Morgan said during some more mind numbing self-promotion on talkSPORT. “What we [Arsenal] need is a fox in the box, a world-class player with bags of experience, who has won everything, and to help us get over the line.

“I can think of somebody – Cristiano Ronaldo! I would take him for six-months in a heartbeat. This idea that Ronaldo can’t suddenly play football, I’m sorry, it’s laughable.”

Well, actually Piers, your suggestion is the laughable one. And I don’t think there is anyone who believes that Ronaldo suddenly can’t play football.

It’s clear that he can, a quick look at his goal tally for United last season shows that he can still do it when a team is basically built around trying to give him service. But that is not what this Arsenal side is about.