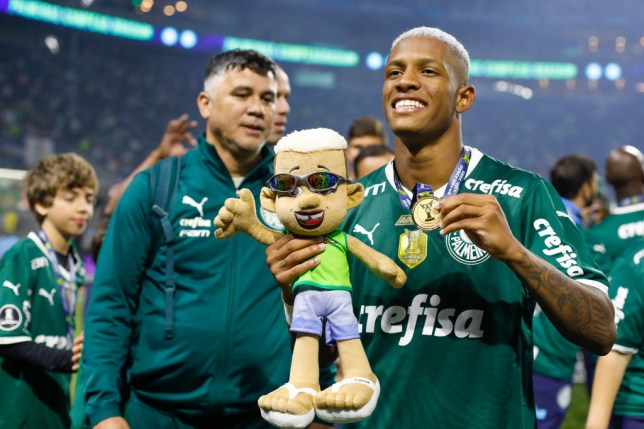 The young midfielder has been heavily linked with a move to north London (Picture: Getty)

Palmeiras midfielder Danilo says he is ‘ready’ to make the step up to Premier League football amid speculation he could move to Arsenal in the January transfer window.

The Gunners are believed to be in the market for a new midfielder with Mikel Arteta keen to bolster his options in that area of the pitch and Danilo is a player that has been on sporting director Edu’s radar for some time.

Danilo, 21, has been a key part of the Palmeiras side that won the Brazilian league title this past season, netting seven goals and laying on four assists.

He now appears ready to make the jump to European football – with a number of teams from the continent also keeping tabs on him – and says he has no fears about leaving Brazil, though he is yet to discuss a transfer with his agent.

Asked about a possible January move to Arsenal or elsewhere, Danilo told UOL Esporte: ‘I see myself mature enough to be able to play in any competition in the world, I’m ready.’

He continued: ‘I prefer not to get involved with these transfer issues.

‘I told my manager to only talk to me if it’s the right thing. Then, we sit down and talk to Palmeiras and decide what’s best for everyone.’

Edu has known about Danilo for a very long time (Picture: Getty)

Interestingly, Danilo also revealed that he has already struck up a good relationship with two Arsenal players – Gabriel Martinelli and Gabriel Jesus – when he was given a surprise call-up to the Brazil national team.

‘The call-up didn’t hurt at all. Being there with the best players in the world, players that I’m a fan of, really helped me,’ he said, with his form having dipped briefly afterwards.

‘It was a very good experience. I made friends and I learned a lot. I also got close to Martinelli, Gabriel Jesus and Dani Alves.’

With Arsenal currently in top spot in the Premier League, the club’s hierarchy are prepared to hand Arteta a sizeable kitty to reinforce his side and both Danilo and Shakhtar Donetsk winger Mykhaylo Mudryk have been linked with moves.

Palmeiras are believed to be demanding a fee of around £21million for Danilo and Arsenal are conscious of the fact that Ajax, Monaco and other clubs are all competing for the youngster’s signature.

Mudryk, meanwhile, is likely to cost considerably more than that with Shakhtar’s deputy sporting director recently claiming that they value the Ukrainian star at the same level and price tag as Manchester United’s Antony – who, of course, cost £85million in the summer.