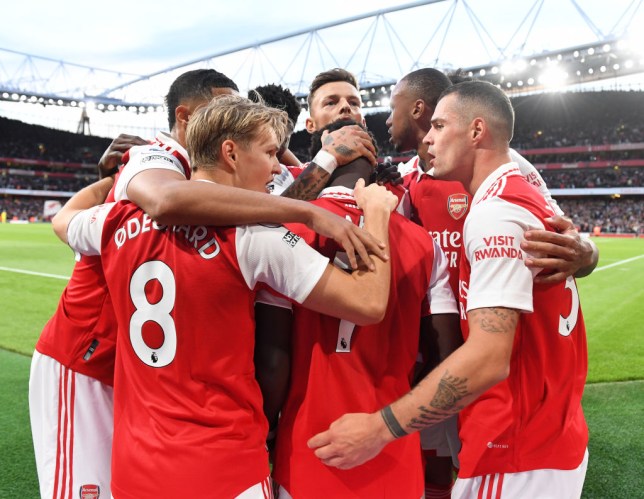 The FA warned the Arsenal star in a letter (Picture: Getty)

Arsenal star Oleksandr Zinchenko received a warning letter from the FA for his exuberant celebrations during the Premier League victory over Fulham earlier in the season.

The Gunners maintained their perfect start to the campaign with a 2-1 win over London rivals Fulham back in August.

Gabriel endured a moment to forget as he lost the ball on the edge of his own box, allowing Aleksandar Mitrovic to put Fulham ahead shortly after half-time.

But Martin Odegaard equalised less than 10 minutes later before Gabriel made up for his error by poking home a winner in the 86th-minute.

Gabriel’s late goal sparked wild celebrations at the Emirates Stadium and Zinchenko – who missed the game through injury – ran from the bench to celebrate with his team-mates.

The former Manchester City full-back jumped onto the backs of his team-mates and pumped his fists towards the crowd, before sharing a brief exchange with Arsenal goalscorer Gabriel.

But Zinchenko’s celebrations led the FA to send out a letter warning the player about his celebrations and telling him to refrain from entering the field of play when he was not involved, effectively making him a ‘pitch invader’.

According to the Daily Telegraph, Zinchenko – who completed a £32m deal to Arsenal last summer – quickly assured the FA that it would not happen again.

The revelation comes after Arsenal received two charges from the FA in less than a week.

Last week, Mikel Arteta’s side were charged for failing to control their players during the goalless Premier League draw with Newcastle.

An FA spokesperson said: ‘Arsenal FC has been charged with a breach of FA Rule E20.1 following its Premier League match against Newcastle United FC on Tuesday, 3 January 2023.

‘It’s alleged that Arsenal failed to ensure its players conducted themselves in an orderly fashion during the 95th minute, and the club has until Tuesday, 10 January 2023 to respond.’

Meanwhile, following Arsenal’s FA Cup third round win over Oxford, the club were charged for ‘failing to ensure their players conducted themselves in an orderly fashion’.